I thought I won the lottery

The thought of selling my property was very daunting, because I had heard stories of what they’d (real estate agents) done to certain other people in the past.

They weren’t having a lot of people coming through the house. And then all of a sudden, after I think it was seven months on the market, he finally said that they had an offer, and they didn’t have an offer.

The thought of selling the house, and having to deal with real estate agents was very frightening. But in the end, I thought there’d be one out there that I could trust, and I just had to find that one that I could trust to sell my house.

I’d had leaflets dropped in my letterbox from Park Real Estate (and many others), they [Park Real Estate] actually sold the house five doors down from me, and they sold it very quickly. I thought they sold that really quickly, so I’d give ’em a call and see how they were.

When I met Scott from Park Real Estate, he came on a Sunday, and it was his day off. And he came with his suit on, and I said to him, “thank you for coming on a Sunday”, and he said, “no problem”. And I said, “well you could have just wore jeans and a t-shirt”, and he said, “no, that wouldn’t be professional of me”.

He was the one. 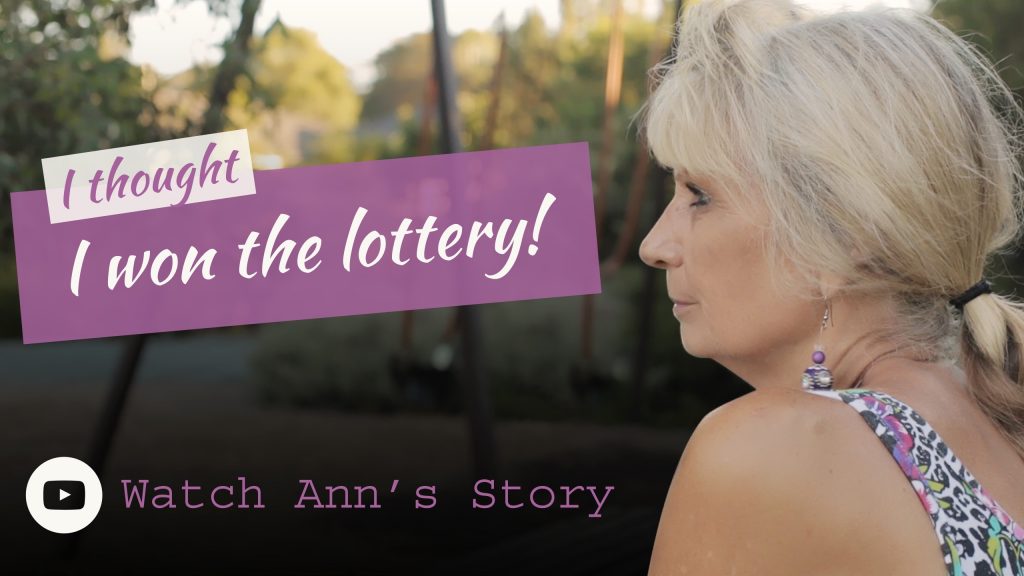 After a few weeks…

We hadn’t had an offer, and Scott was quite surprised about that – that we didn’t have an offer. So, he asked me if I would consider reducing the price of the house.

At first I was a bit apprehensive, because I’d had so many people through the house, and I thought, of all those people, nobody had made one single offer. So it took me a little while to say to him, “okay, I trust you, and what you’re gonna do for me”, and so I agreed to reduce the price of the house by $10,000.

The last thing I wanted to do was reduce the price of my property.

Scott came back to me about a week later and again, we’d had more people through the house for inspections, and again, not one offer. So, he said, I’m gonna have to ask you again, Ann, and this is a big one, I’m gonna ask you to drop it to $599,000.

I was pretty shocked when he said it, and I said to him “you’ve already had so many people through, and no one’s not even made one offer, and now you wanna drop it even more?!”.

It was a few days later, and we had another few people go through my house, and Elena from Park Real Estate took them through, got a phone call from Elena to tell me that she had somebody in negotiations. So I was very happy at that stage, but then thoughts started creeping into my head that they had it for $599,000, what are they [buyers] going to offer me?

So anyway, then I got a call from Elena, saying “it’s good. But I’m not gonna say anything, Scott will come out and see you”.

The hours in between waiting for Scott to arrive at my house, I was feeling so sick and anxious, by the time he got there, he didn’t tell me at first what price it was, he just sat down, and he had the contract, and he said to me, “would you like to see the price, Ann?” And pushed the piece of paper over to me, and I went, “oh my God, you’re kidding. They did it!”

When I went to the bank after the settlement had gone through, I printed out my balance of my bank account and I had to stand there for a few minutes and put my glasses on, and I actually thought I’d won the lottery.

Yep. He did care. He really did care.

He wanted to get the best price he possibly could for my house, and he did it. Even though I had doubts halfway through it, when they dropped the price, but he came through in the end.

And I still feel like I won the lottery.

Oh, I hope this helps somebody else out there who’s stuck in the similar situation to me… You know… just have faith. Just get the right agent. That’s the thing.

Get the right agent and have faith in that agent.

Click on the image above to grab your free copy of The 18 Worst Mistakes Home Sellers Make.

We are proud to be a Jenman Approved agency.

What is the difference between a Jenman Approved agent and a typical run-of-the-mill real estate agent?

How do you rate your experience?

Sorry, you didn't enjoy your experience.
Your feedback may be posted publicly on the web.

Feedback has been submitted!
Invalid Email!
Please supply all fields!